Sensors are the eyes, ears, and maybe even the taste buds for the smart home. Sensor manufacturers, integrators and device/appliance OEMs are beginning to realize the incredible market potential of this growing sector of the IoT sector. However, there are some big differences between the Smart Home market for sensors and the various other sensor markets like Industrial IoT, medical devices, automobiles, drones, etc.

The big difference is the word "Smart". In the smart home sector, in addition to the sensor networks, hubs and gateways, there is also a smart cloud that provides data management and analytics, as well as links to smart phones, social media and service providers.

For example, in the smart home application in figure 2, a network of sensors monitors the location and movement of residents in the home. 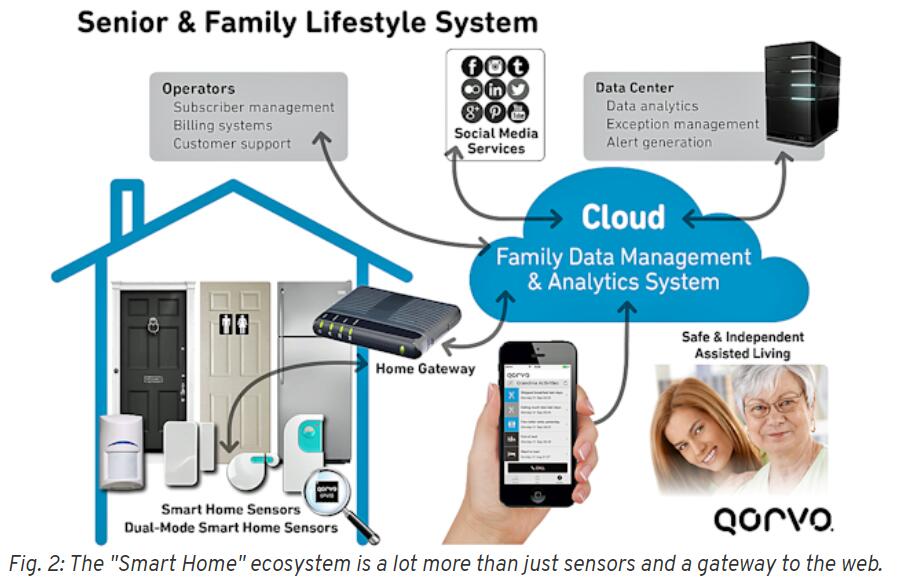 In the Sensara Senior Lifestyle system, these can be as few as four motion and position sensors. They sense when the resident in the home leaves the bedroom, when they enter the bathroom, when they are in the kitchen cooking, and when they leave and return to the home. This data is then uploaded to the cloud intelligence, enabling the system to essentially learn how the resident lives their life.

After a short period, i.e., a couple of weeks, the system has gathered enough data to recognize when something changes, when something abnormal occurs. For example, if the resident does not get out of bed, if they don't go to the bathroom or don't leave the house, the system can then send alerts to the family or caregivers.

Maybe even more interesting, the system can also recognize slight, ongoing changes that may indicate that there is a problem. For example, if the resident is getting up later and later, if there is a big change in how often and when they go to the bathroom, the system can send an alert to the right person, recommending that they investigate.

For many senior citizens, who value their privacy and individuality, this kind of "no maintenance system" with no intrusive cameras and no need to carry or wear emergency necklaces or bracelets, is a very appealing option. This sensor-based system provides a sense of security for both the resident as well as their family.

Speaking of security, the same sensors used in this Senior Lifestyle system can be hooked into other smart home solutions. For example, the position and motion sensors can be used as part of a home security system. If the system recognizes that there is movement in the home during the time when no one should be in the house, or if the system is smart enough to know that the intruder is not someone the home recognizes, an alert can be sent to a security monitoring company.

These same motion and position sensors can be used to help regulate temperature, lighting and energy usage. For example, if someone accidently leaves the lights or TV on after they go to bed; the system can turn the lights and TV off. Or if the home is big, the network of sensors can recognize where in the house the resident is, and regulate the temperature in that room while closing down the heating or air conditioning in the parts of the home that are unoccupied. This could greatly help reduce energy costs for the resident.

In the Senior living example, the resident may like a system that recognizes their movement, and as they go from one room to another, turns on and off the lights to ensure that they have a safe journey. Sensor systems like these can also open and close window drapes and shades, as well as automatically verify if all the doors and windows are closed and securely locked. And, if there is an unsecured door or window, the system can lock it.

The resident may also want their smart home system to link in a health monitoring solution that tracks their body chemistry, heartbeat, blood pressure, etc., and then after uploading it to the cloud intelligence, compares it to what is normal for this person as well as other people in a similar age and health group. 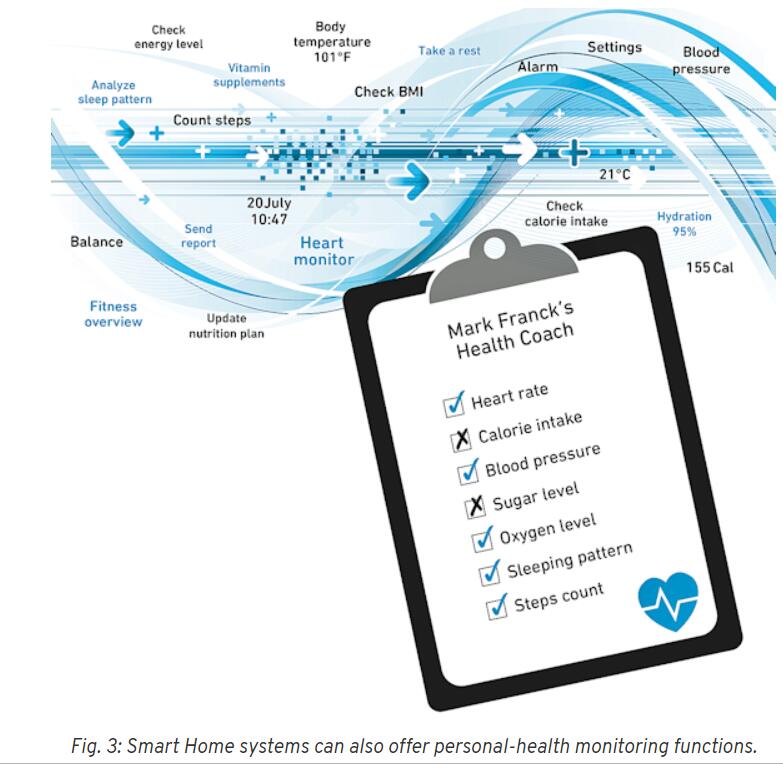 Options abound as many other building systems can be connected to the smart home network once it is in place. For example, a smart water heater leak detector system could be installed to prevent expensive water damage from flooding.

A basic water heater leak sensor sends out an alarm or an alert if it detects a leak. However, a smart system could go a few steps better. Not only does it send out an alarm, it also talks to the water meter where the water enters the home and turns off the flow before it can create major damage. Cutting off the flow can also reduce the cost of the wasted water. The smart water leak detection system can also talk to the home's power meter, and turn off the gas and electric supply lines to the meter, preventing waste of energy and a possible fire situation.

This application is indeed smart as it not only recognizes a problem but it also solves it. That is the big difference between a smart home network and a connected network.

Many devices and appliances can be connected to the web and monitored as well as controlled by a smart phone app. However, these are just connected devices, not smart devices. Smart means that not only are the various home systems connected to each other, but they also share cloud intelligence and can learn. And even smarter, they don't need a human in the middle to make a decision.

This is what makes a smart home system smart. It consists of a network of interconnected sensors, talking to a cloud intelligence that actually makes the resident's life safer, more secure, and more efficient. Now that's smart.

Cees Links was the founder and CEO of GreenPeak Technologies, now part of Qorvo. Under his responsibility, the first wireless LANs were developed, ultimately becoming household technology integrated into PCs and notebooks. He also pioneered the development of access points, home networking routers, and hotspot base-stations. He was involved in the establishment of the IEEE 802.11 standardization committee and the Wi-Fi Alliance. He was also instrumental in establishing the IEEE 802.15 standardization committee to become the basis for the ZigBee sense and control networking. Since GreenPeak was acquired by Qorvo, Cees has become the General Manager of the Low Power Wireless Business Unit in Qorvo.